All APG ranges are based on several innovative technologies in which APG has become a specialist over time: the coaxial Isotop™ concept and D'Appolito principle, K-Horn and dual interactive chamber.

Coaxial technology consists of two or more loudspeakers on the same axis, which results in linearity for both amplitude and phase curves and in a perfectly consistency acoustic field even in near field listening.

APG has developed a unique know-how in the optimisation of this technology which has been implemented directly in the coaxial speakers (Micro Axial, SMX and Dispersion Series) and in the development of the Isotop™ driver, APG’s proprietary compression driver.

The D’Appolito baffle enables directivity control without the use of a horn.

The directivity is controlled lower down in the frequency range while limiting the distortion and the diffractions caused by a physical horn. Furthermore, the close coupling of the two transducers affords a significant gain in efficiency.

The D’Appolito principle is implemented in the MC2 loudspeakers, Matrix Array systems and the Uniline system.

It consists of loading a double interactive chamber with a K-horn. This exclusive technology provides a significant increase in gain, between 4 and 6 dB, compared to the conventional bass reflex load and direct
radiation.

This technology has been designed for the new generation "TB" subwoofer family. 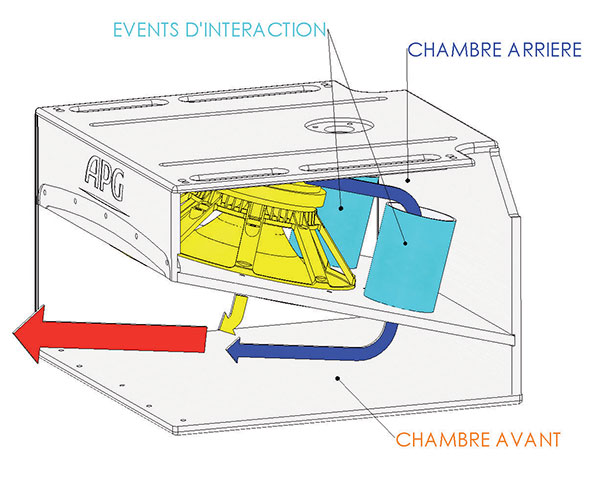 Harmoniously extending the coaxial transducer, the anti-diffraction 'APG NDB' baffle allows a perfect adaptation of the enclosure to its environment.

The combination of coaxial technology and an anti-diffraction baffle allows perfect positioning of the sound in space, homogeneous coverage and the absence of distortion.